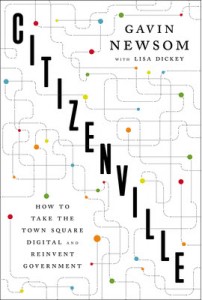 Posted:   30 October 2013
“We think of government as a kind of vending machine. We put in our taxes, and get out services: roads, bridges, hospitals, fire brigades, police protection … and when the vending machine doesn’t give us what we want, we protest. Our idea of citizen engagement has somehow been reduced to shaking the vending machine.”

Posted:   2 November 2013
“With the explosion of social networking, smartphones, and apps, we have the tools available right now, in our hands, to transform government. We just have to have the courage to use them.”

Posted:   4 November 2013
“The government’s delay in implementing new technologies is a big problem, but it’s not a new one. The sad truth is that the history of government is a history of technophobia. Sixty years ago, as President Roosevelt was delivering his fireside chats by radio, Congress was passing laws attempting to keep microphones off the congressional floor.”

Posted:   6 November 2013
“Bureaucracy was a hot term 90 years ago. It helped us to prevent graft, patronage and corruption. … I’m in the center, I push whatever it is out to you, and you’re a passive recipient, isolated from others. It’s a one-way model. In education, it’s I’m a professor, you’re a student. An empty vessel. In politics, it’s You vote, I rule.”

Don Tapscott, quoted by Gavin Newsom in Citizenville, “A Fleet of Wright Flyers”

Posted:   9 November 2013
This morning, I woke up to an alarm clock powered by electricity generated by the public power monopoly regulated by the US Department of Energy with rates set by the Utah Public Service Commission. I then took a shower in the clean water provided by Springdale’s town government through an agreement with the National Park Service.

After that, I watched TV news on a FCC regulated channel along with some interviews on CSPAN and finally watched a weather prediction that was based on information provided by the National Weather Service in NOAA using satellites designed, built, and launched by NASA.

I watched all this while eating breakfast that was made of food inspected for safety by the US Department of Agriculture and took a pill that was determined to be safe by the Food and Drug Administration using a clock that was accurate due to standard clocks maintained by the National Institute of Standards and Technology and the US Naval Observatory.

I got into my National Highway Traffic Safety Administration approved automobile on roads built by the Utah Department of Transportation in cooperation with the Federal Department of Transportation while stopping for gas with quality inspected by the Environmental Protection Agency using legal tender issued by the Federal Reserve bank. I stopped to mail a letter that will be delivered by the US Postal Service, passing by a school operated by the Utah Department of Education and the Washington County Board of Education.

When I returned home, I logged onto the Internet that was developed using research grants from the Defense Advanced Research Projects Administration and logged onto a Fox News forum to post messages about how socialism is bad because the government can’t do anything right.

Based on an Internet Meme quoted by Gavin Newsom in Citizenville, “National Government Coming Out Day”

Posted:   14 November 2013
When people are frustrated, and angry, and mad, and a lot of them have legitimately gotten the shaft, if you look like you’re sharing information and you trust people to draw rational conclusions, your chances of getting to a good outcome are lots better.

President Bill Clinton quoted by Gavin Newsom in Citizenville, “Let the Sunlight In”

Posted:   16 November 2013
Whenever there’s an opportunity for people to post comments anonymously, the discourse invariably sinks to the lowest common denominator of name-calling, insults, and flame wars. People become their worst selves. Civility falls by the wayside. When that layer of privacy is eliminated and people are forced to stand publicly behind what they say, civility returns.

(At Kinesava.com/ZiCC, you have to post under your actual name.)

Posted:   27 January 2014
A closed system preserves the status quo. In the information economy, information is power. And those who have power are naturally reluctant to give it up.

Vivek Kundra quoted by Gavin Newsom in Citizenville, “Living in a Glass House”