The Tuacahn Summer Arts Institute held a Faculty Chamber Music Series concert in the old Rockville church … now the Rockville Community Center … on Saturday night. The combination of the classic old church, the even more classic town of Rockville, and the classical music of Mozart, von Weber, and especially Tchaikovsky seemed to blend together to create an memory that will be one of those that will live in my heart as long as my heart lives.

The whole ZiCC community turned out for a very good reason. The internationally acclaimed musicians provided a performance that matched anything I ever heard in cities from the Washington Lincoln Center to the Seattle’s McCaw Opera Hall. The Mozart was rhythmic, whimsical and melodic as only Mozart can be. Von Weber was reliably classical. But Tchaikovsky soared. I could hear hints of 1812 and Romeo and Juliet. All were enriched by virtuoso performances from musicians whose abilities can only be compared across continents and centuries.

The array of black folding chairs was full to the back row and the wooden pews on both sides were too. But when I looked outside during the intermission, most of the parking on Rockville’s shady main street was still open. I realized that must be because most of the people from Rockville simply walked to the concert. It’s a sad commentary on the life we live to assume that the only way to get somewhere is to move thousands of pounds of metal and plastic. ZiCC people in Rockville don’t have to assume that. It’s a beautiful thought.

(One of the nicer traditions here in ZiCC is putting away the chairs. In both the Springdale and Rockville community centers, dozens of ZiCC friends pitch in to stow the chairs away after an event. Many willing hands make light work. The job is done in just a few minutes.) 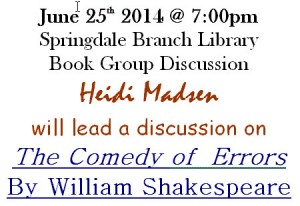 As Roxy and I guided our own thousands of pounds of metal and plastic back to Springdale, my mind went back to the continual stream of art and science that graces the Zion Canyon Community. Great performances and outstanding science seem to be drawn to this place. A few years ago, the Springdale Community Center hosted an expert in Shakespearean sonnets. The Springdale Library book group is reading Shakespeare’s A Comedy of Errors this month. (My review of the play can be found here.) Inspired by the lecture, I composed two sonnets in the classical style of Shakespeare based on the theme of Zion Canyon water. (And topped them off with a limerick just for fun.) Water is even more of a theme this year. And since recycling is in vogue these days too, I decided to recycle my sonnets here.

Sonnet to a Virgin Dew Drop

A drop of dew was born a thousand years ago.
Water vapor from a sea a thousand miles away.
The dew drop fell as snow on the Kolob plateau.
One of thousands of billions who danced in a winter ballet.

When sun turned deep white snow to blood red mud,
Slot canyons raged until the surge was spent.
But a drop of dew did not join the raging flood.
The drop began a long and slow descent.

The dew drop fell through stone a mile deep.
Nations rose and fell; the drop secure.
Then Kayenta slate showed the path to a gentle seep.
The dew drop emerged, so cold and pure.

The Virgin is made of dew drops like this.
Each one is as precious as a virgin’s kiss.

The rain went on for weeks without an end.
Brown water surged across our grassy park.
The desert makes some rain a valued friend.
This much made all the people sad and dark.

Just sand remained where dogs and people played.
The word went out. The tons of sand must go.
Next Saturday, the park will be remade.
Just bring yourself, a spade or rake or hoe.

The day dawned bright and full of warming sun.
A hundred friends worked side by side that day.
We worked as one until the job was done.
Until the sand had all been pushed away.

The Virgin didn’t really beat us down.
It just made us a stronger, better town.