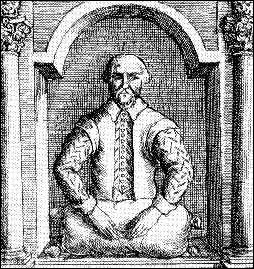 Much is not known about the mysterious playwright from four centuries ago. Some historians believe that the historic Shakespeare didn’t even write the plays attributed to him. The chronology of Shakespeare’s plays is just one of the things masked in the gray mist of forgotten history. Since his plays were not published until seven years after his death, records that could tell us when they were actually written simply do not exist. But careful inspection of certain phrases used in The Comedy of Errors suggest that this play was written at about the year 1594 which would have made it one of the earliest, if not the very first. It is no later than third in most chronologies attributed to Shakespeare. If it is his first play, it can be viewed as a “first effort” by someone who later became the most renowned writer in the English language.

Viewed in that light, some of the unique features of this play are much easier to understand.

A possible review of a very early performance of the play recorded that it, “continued to the end, in nothing but Confusion and Errors; whereupon, it was ever afterwards called, The Night of Errors.” Not an auspicious beginning.

The most notable feature of the play is not the play itself, but rather the mirror of the time when it was written. The twin servants, both named Dromio, are beaten continually throughout the play. It was customary for masters to beat servants back then. And the relationship between husband and wife, brought out by the mistaken identity, seems to be one of commerce, not comfort. The wife of one twin describes her husband.

One of the Dromio servants is even more unkind in his description of the woman he is betrothed to.

Marry, sir, she’s the kitchen wench and all grease;
and I know not what use to put her to but to make a
lamp of her and run from her by her own light. I
warrant, her rags and the tallow in them will burn a
Poland winter: if she lives till doomsday,
she’ll burn a week longer than the whole world.

He and his master share a long scene describing where they discuss how different countries might be found on her evidently expansive exterior.

ANTIPHOLUS OF SYRACUSE
In what part of her body stands Ireland?
DROMIO OF SYRACUSE
Marry, in her buttocks: I found it out by the bogs.

It’s all a bit more crude than you expect Shakespeare to be.

Light, slapstick comedy is a tried and true way for young writers to break into the business. It only makes sense that Shakespeare tried it too. In this genre, Shakespeare is clearly second tier. For a comparison, consider a comedy of mistaken identities by masters of the art, Abbott and Costello:

But the tide of greatness, once in full flow, cannot be resisted. All boats are swept along with it from the mightiest clipper to the poorest rowboat. The Comedy of Errors is therefore accorded the same reverential awe as the rest of Shakespeare’s plays, even though, judged by its own merit, it would be a historical footnote at best.

“Reputation is an idle and most false imposition; oft got without merit, and lost without deserving.”
- WILLIAM SHAKESPEARE, Othello