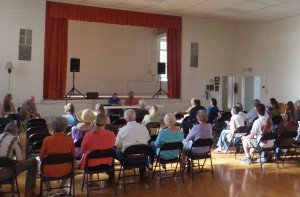 Bob Orton, Chairman of the Rockville-Springdale Fire Protection District, brought the meeting to order shortly after 6:30 on Monday. We all knew that we were in for a difficult session. Fees are going up. The details won’t be released until a public hearing is held later this year. This was just an information meeting.

The people of Springdale and Rockville are between a rock and a hard spot. A resident of Rockville on a fixed income who didn’t plan on living in a tourist town and doesn’t like it much is between a wall of broken glass … and a hard spot. The fire board was there to explain why it has to be that way and what they planned on doing about it.

But before I get into that, I want to thank the fire district board for their selfless dedication to the Zion Canyon Community. The worst thing that I can say about these great people is that they waited too long to hit us with these facts. It would have been better if they anticipated the future earlier and ramped up charges a little sooner instead of hitting us with such a big charge all at once. Bob took the blame for that one, but it’s clearly a sin of excessive kindness.

Michael Plyler’s explanation about the problem wasn’t a lot different than the one he gave to the Springdale town council on 14 April. (Covered in my report here.) Practice helped Michael make it shorter and main points clearer. Since I have already summarized Michael’s presentation, I won’t do it again here.

The main problem is that we’re a very small community … Michael estimated that at most … including even absentee home and business owners … 1,100  people were trying to cover the cost of a fire and emergency medical service for three million visitors a year. That’s not all bad. Left on our own without the three million visitors, we would be forced to use distant and unreliable services. Lots of other rural communities do. Here, Rockville and Springdale people at least have a local fire and rescue service, even if we struggle to pay for it.

But it’s also clear that the tourist business isn’t paying their fair share. Michael added this example to his presentation to drive the point home.

Another reason we’re struggling to pay the cost of our service is that the State of Utah requires a lot of expensive equipment.

These things are called “unfunded mandates” by the state legislators in Salt Lake. They moan and groan very loudly about them when the feds do it to Utah.

But Michael and the board didn’t pull any punches on the biggest cost: labor. We’re becoming a community of old people who can’t staff a volunteer fire department anymore. So we now have to pay firemen to be on call if we expect to be able to put out a fire at night or on weekends. We pay our firemen far less than we really should. Michael pointed out that where he works, they pay people $11 an hour to sell postcards. They pay two firemen to be on call at our station here $7.50 an hour. Michael was a fireman in Las Vegas years ago. He was paid $10.63 an hour in 1985. In today’s dollars, that’s $22.50.  Michael said he wouldn’t run into a burning building for $7.50 an hour. He said that it was outrageous to ask our firemen to do that.

Michael makes this case with passion and conviction. I think we’re generally convinced. But that doesn’t answer the question, “What do we do about it?”

One solution would be to turn it all over to the nearest larger department in Hurricane. Financially, it wouldn’t be a good deal. I covered this in my earlier report too. But the bottom line is that emergency medical service is three-quarters of an hour away if we do that.

The other solution is to raise fees. Copies of a new four page schedule of categories of fees were available to everyone. The board has been working hard to figure out how to make the fees as fair as possible. For example, there are five different categories of “developed residential” fees. There are eight categories of hotels and B&B’s. The board estimates that 70% of the fees will be paid by businesses and 30% by residences.

When the floor was opened to comments, people were in a lynching mood. They were willing to resort to extreme solutions. Some people said that payment should be guaranteed before someone was loaded on an ambulance. The board said that refusing medical service to people who need it was not something they would do. Virtually everyone blamed the hotels. And some people from Rockville were blaming Springdale.

Louise Excell, who was on the Springdale council for decades, did her best to explain the limits of what a town government could do. The Springdale town council looked into increasing the tax (“TRT” – Transient Room Tax) to fund the fire district, but they found that state law simply didn’t give them the authority. Some of the TRT tax is already committed to pay for a water tower, but even if Springdale gave the fire district all of the TRT tax, it still wouldn’t cover expenses.

I agree with asking Springdale for more money. Play hardball with Springdale. Point out what might happen to the TRT revenues if we canceled our ambulance service and then a major news media started reporting that if you have a heart attack in Springdale, you’re likely to die.

I agree with going after the Washington County Commission. They’re reaping the benefits from Zion and not returning enough to the Zion Canyon Community to pay for it. There’s an election coming up. Vote the bums out.

I agree with lobbying the Utah State legislature. It seems to me that they are levying “unfunded mandates” on the fire department. Isn’t that what they scream about when the federal government does it to the state?

I agree with lobbying the federal government. Cheryl Frassa stood up and said she had experience doing this and offered to help. The very existence of Zion Park is the major source of the problem. Shouldn’t they be helping more to pay the cost?

But the fire board isn’t to blame.

The bottom line is exactly as Louise Excell stated it.

As a community, we need to decide whether we are willing to pay for this service or to do without it.

Speaking for myself, I value this service. I’ll pay.