Eight people were there to watch Chairman Joe bring the meeting to order. (And curtail all of the chit chat.  This thing is starting to be as good a source of neighborly gossip as the post office.) There were a few new people there too! When I first started documenting these meetings, I was alone in the audience most of the time. Better and better!

Kudos to Chairman Joe! He got through the five main discussion items in an average of 16 minutes each. Keep in mind that these topics have consumed months and months of discussion in the past. Maybe that was the secret for getting through the agenda at light speed this time. I’m sure that the commission is just sick and tired of talking about them now … (Yah! Let em put a nuclear waste dump behind the school! It’s gotta go somewhere! … )

I noticed something else, too. People were raising their hands when they want to speak. There’s no rule about this. Technically, a chairman doesn’t have to let anyone in the audience speak unless it’s a “public hearing”, but most times, they do. One of the reasons this meeting went well is that everybody was very civil and considerate. (Nobody just jumped up and started talking! There were no developers there. Maybe that had something to do with it!) 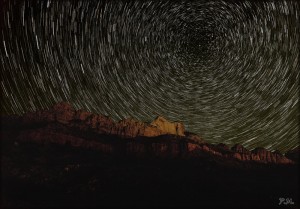 Before the meeting got rolling, kudos went to Tom for putting together the latest night sky event. The most recent one was about night sky photography. My neighbor, Paul Mailloux has been winning awards for his landscape photography recently and as the illustration shows, we can look forward to some great shots at night now as well.

The five items on the agenda were all things that have been chewed on for months:

Because the discussion about all of them was brief and to the point, I can cover what was said individually this time without boring you to somnolence.

To refresh readers on the problem, there’s a huge loophole in Springdale’s ordinances right now. Because all “structures” on a property can be up to 5,000 square feet and because there can be as many of them as other limits allow, a developer could fill up a lot with buildings until it looked like a warehouse district. (State law requires a town to grant permission to an application unless the rules disallow it. The burden of proof is on the town, not on the developer.)

This was known as an issue years ago and it’s been a current project since January. (I’ve mentioned it in eight previous reports. I can remember this problem from ancient times when I was a commissioner … back when dinosaurs still roamed the Earth. Plugging this loophole has been a long time coming.)

The ordinance that is now being considered still allows any number of accessory structures, but it limits the total size of all of them together. In practice, this means that someone might not be able to max out the size of a “main structure” and still build a few garages. This was very concerning to commissioner Marriott. He convinced the commission to also consider a simple idea of allowing an accessory structure that was “no more than one-half the size” of a main structure. So there are still two proposals being considered. They have Mike’s idea and a table:

They’ll have to have at least two more meetings (plus a town council public hearing since the planning commission can’t actually decide anything) to put this one to bed. This might drag on through the fall at this rate. It doesn’t seem like something that should take this long. The discussion made it clear that Tom actually decided on the numbers in the table. This, and Mike’s last minute idea, are (yet again) examples showing how it’s hard it is for a committee to actually design something during a structured meeting.

(Maybe if there was an online “public and accountable” Internet forum where ideas could be developed before the meeting? … Naaahhhh! … Dumb idea!)

This was another fix for something that just wasn’t working. The very effective team of Mark and Joe working in tandem can be credited for making sure this was reconsidered. The problem here was that the existing ordinance, in an excess of concern for the creativity of sign designers, opened up a loophole by technically allowing someone to only count the actual area of each letter in a sign and make the actual sign gi-normous. Trust me … some developer would do it.

Again, the fix they’ve arrived at is simple. They plan on allowing the number of sides in an “enclosing polygon” to have a maximum of ten sides.

There are forces in town who believe that solar panels are unsightly and everything possible should be done to make them invisible. In my humble opinion, this is short sighted and not what Springdale and the Earth needs. I’ve written a number of articles urging more support for solar power here. In Solar and Springdale, I predicted that the town was going to place severe limits on what people can do to provide renewable solar power.

That prediction is coming true. The “purpose” section of the ordinance states “The standards in this section are intended to allow and encourage property owners to develop solar energy systems while also protecting surrounding areas from the reflectivity, glare, and visual impacts.” In my humble opinion, that’s only half true. Encouragement is severely lacking.

Translation: If you want to put a system on your roof, often the cheapest way to do it, give up on the goal of making it efficient by aligning it to the sun. And no exceptions are even made for locations (like mine) where someone would have to perch on a neighboring mountain with binoculars to see it.

During the meeting, the commission added a requirement that you couldn’t generate more power than your house uses. The goal was to “stop people from putting up solar farms”. If only! Solar power isn’t efficient enough – and Springdale land is way too expensive – to do that. But this requirement would eliminate the possibility of taking advantage of a technology breakthrough or a special situation where that might be possible.

Tom pointed out that at least one property owner already generates more power than the property uses. And the town generates enough solar energy to violate this clause, so they agreed to a loophole for public use zones but everyone else is specifically disallowed. I guess that one property will now become a “non-conforming use”.

This will go to a public hearing next. Springdale used to have a real environmental attitude!

This is all about allowing people to rent rooms on their property. The main problem here is that a lot of people are already doing it.

If memory serves, everything that the commission discussed on this item has been discussed before. Some of them, two or three times before. Remember, this one has already had a “public hearing” and has been kicked back to the commission for another try.

It was clear that some of the people who attended the meeting were there just for this discussion. “Public clamor” in previous meetings persuaded the commission to strike ADU’s from the Valley Residential subzones (These were just created just a few months ago. In general, they’re smaller lots in the middle of town.) And they went even further in this meeting and eliminated them from the Foothill Residential Zone too. They are only allowed by “conditional use permit” in the Valley Residential zone. That means there are special conditions that must be satisfied in that zone. There was some public clamor about this during this meeting. The commission was not dissuaded.

This has been a tough one! It seems to me that the commission has done a good job of deciding something that has been very controversial. The ordinance may not be perfect, but it’s a good first start at worst. It’s also a detailed and complex ordinance. If you want to really understand it, you will have to consult the meeting packets at the town web site. Or call Tom. (He likes to get interrupted by phone calls!) It will go to a public hearing next. Expect more fireworks.

Again, the commission has done a good job of putting together a difficult and complex ordinance. Actually, Tom has done a good job! In past meetings, the commission seems to have chewed around individual pieces of what Tom wrote as he crafted new versions. For example, in this meeting, they reduced the allowed number of units from six to five. It’s hard for a committee to design something in a structured meeting! Consult the meeting packet for the details of the final version.

But as Shakespeare would have it, “All’s well that ends well.” Hopefully, you feel that way about this report. This ordinance will go to a public hearing now too.