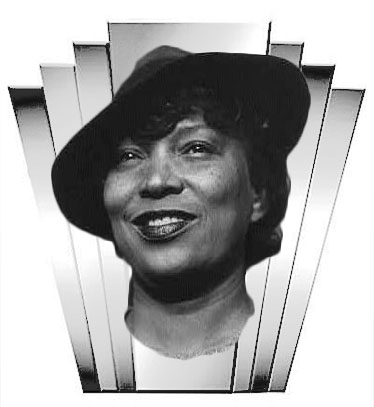 When I put down Zora Hurston’s book, Their Eyes Were Watching God, I had no idea how I would write anything about it. Her evocative writing affected me so powerfully that it seemed like it would be sacrilege to even attempt to comment about it. I decided not to do it; to break my own record of writing a review of each book rather than attempt to say anything at all about it.

Not content, but resolved in my decision, I busied myself reading some of the other books that had been pushed to the back of my desk and keeping up some of the other writing that I was doing. But I had to know more about the creator of such a book, so I sent for two other books about Hurston: her own autobiography, Dust Tracks on a Road and what seemed to be the leading biography of her life by Robert Hemenway.

What a life she had! It was the stuff of legend. Over and over, her life shouted to the world, “I am my own person!” She lied or told the truth as she saw fit. She wrote from her soul or from her purse as the need arose. She picked lovers, friends, and benefactors to suit whatever purpose she had at the moment. I’m reminded of the line from the musical “Cats” – Every cat has three different names, and the last one is the name that, “THE CAT HIMSELF KNOWS, and will never confess.” Hurston was a cat. She knew herself and never did confess who she really was to anybody.

With a computer search engine in one hand and her biography in the other, I went in search of Zora.

Like the canyon walls of Zion, Hurston’s life has clear, boldly colored layers. The bedrock of her life was in the rural town of Eatonville, Florida, where she found such joy as a child that it supported the rest of her life. A transition layer finds her in Washington, D. C. where she learned that joy is not given, it is seized from life. The broad, high wall of her life was in Harlem where her joy was on full display. And the deeply eroded end of her life was in Florida again where joy finally left her. Her own autobiography holds Hurston’s simple wish:

I want a busy life, a just mind, and a timely death.

Hemenway’s biography shows that she reached the first goal with glory. She fell somewhat short of the second and third. Hemenway provides generous explanations of the battles she had with every person she was ever close to. But even those who recognized her genius eventually could not endure an independence so overpowering that it dominated every relationship she had. As a result, the final years of her life were spent in poverty and isolation.

Published in 1937 at the peak of her career, Their Eyes Were Watching God is a view through a telescope into another time and a different culture. Hurston burst onto a national stage in what is now called the Harlem Renaissance by blacks and the Roaring 20’s by whites. Life might have been more free and joyful than any time since and Hurston took full advantage of it. She had achieved respectable success as an academic anthropologist, studying under the “Father of American Anthropology” Franz Boas at Columbia University and then collecting authentic folk tales back in her native environment in the South. But formal scientific study of “her people” … and they were her people … was far too narrow and cold to hold a life force as big as Hurston’s.

Today, you can lose your job and your social standing by simply using the word, “nigger” in a context where you can be quoted. Hurston called herself the “Queen of the Harlem Niggerati” and the journal she helped found was called Fire!!.  The word “nigger” is seen throughout her book. While others of her time called themselves, “black”, Hurston wrote How It Feels to be Colored Me in 1928. She distanced herself from flaming black revolutionaries like Marcus Garvey and said that the NAACP was a bunch of “negrotarians”. Rather than standing in opposition to whites as so many of her time did, Hurston simply stood apart from them. She refused to follow the rules of blacks rebelling against a white culture or the rules of whites who owned the culture. She paid a high price for her independence. Hurston’s work was lost in the literary wilderness for thirty years; almost as long as the Hebrews for the same sin of refusing to follow the rules. Hurston was no “New Negro” … she was a child of Eatonville living life to the fullest. She never forgot that and her book luxuriates in it.

According to her official website, Their Eyes was written in seven weeks while Hurston was living in Haiti working at her other profession as a cultural anthropologist. The folklore that fills the book holds it together like limestone holds the grains of sand in the walls of Zion. She used words like Van Gogh used paint – vivid color slapped on with broad brushstrokes. Hurston had no patience for polite language when there was a story to be told and she did not see herself or her people in any comparison with whites; she saw herself and her people as a culture that stood by itself.

Like a skyrocket bursting in air, Hurston’s creativity explodes in Their Eyes with a force not seen again. Alone in her own time and until the world caught up with her decades after her death, Their Eyes celebrates the black people of the rural South as a unique culture, secure and independent in their own traditions. While others wrote about rural southern blacks as downtrodden, poor, and oppressed by their former masters, Hurston rejoices in the richness and poetry of their lives. Hurston was no mirror to white expectations either. Eatonville was an all-black community that knew its own soul and Hurston absorbed this understanding completely early in life. Whites are present only as passing references when they have to be and are never central characters, just as they were in Hurston’s own life.

Her own autobiography, Dust Tracks on a Road, was published in 1942 when she was entering the last layer of her life and isn’t considered to be her best work, or even complete and honest. She hid one of her marriages and it wasn’t discovered until after her work was rediscovered in the 1970’s. At the end of her life, Hurston wrote to live rather than living to write. Their Eyes is placed in the same Eatonville that Hurston grew up in and is about a beautiful young woman in that town. In many ways, it can be thought of as the honest autobiography that Dust Tracks is not. But Dust Tracks is honest in the sense that it is more revealing. Their Eyes doesn’t have to pretend to portray her own life and she made up a life that she wished that she had. Dust Tracks uses many of the same folk stories, but places them directly in her own life. It’s easier to see what she cherished and amplified and what she despised and left out.

Their Eyes is much more than just an idealized version of her own life. As I savored the rich flavor of her writing, the strongest image in my mind was not rural black people; it was classical Greek legends and Aesop’s moral stories. The characters are deliberately writ large to make the point of their being unmistakable to any reader. The story of Janie coming of age under the pear tree in her grandmother’s front yard is, to my aging white male eyes, the most expressive view of this transformation I have ever heard:

She was stretched on her back beneath the pear tree soaking in the alto chant of the visiting bees, the gold of the sun and the panting breath of the breeze when the inaudible voice of it all came to her. She saw a dust-bearing bee sink into the sanctum of a bloom. The thousand sister-calyxes arch to meet the love embrace and the ecstatic shiver of the tree from root to tiniest branch creaming in every blossom and frothing with delight.

This is how the ancients told their stories – rising up out of soil into the atmosphere of imagination; full of life but rising beyond it.