Six years ago, Springdale, Utah–deep in red rock country–was a community in chaos. A friendly “outsider” came to the rescue. 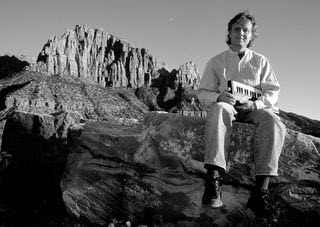 Phillip Bimstein when he was mayor of Springdale

Situated just outside Zion National Park, Springdale, Utah (pop. 350), has one of the most breathtaking settings in the nation. Elegant inns, middle-class motels and inexpensive campgrounds coexist in this town that sees 2.5 million visitors annually. Six years ago, however, Springdale’s political climate was anything but serene.

Tensions ran high between developers and conservationists. Developers argued for the right of property owners to do what they wanted with their land. Others thought the local government should step in to preserve what they saw as the quality of life. “People took sides on an issue, and lines got drawn,” says Mavis Madsen, a librarian. “They took things very personally. There were many battles and many scars.”

“People took sides, and lines got drawn,” says one resident.

“A sheriff was needed at every council meeting,” says another.

Don Falvey, who was appointed superintendent of the park in 1991, recalls the atmosphere: “I was advised that when I went to the town meeting in Springdale, I should sit close to the deputy sheriff, because he would be there to break up the fights.” Falvey assumed that his advisers were joking. They weren’t. “It was true,” he says. “They needed a sheriff at every meeting.”

The town was desperate for new direction. In 1993, a group of residents asked Phillip Kent Bimstein to consider running for a four-year term as mayor. A Chicago native, Bimstein had impulsively bought a house in Springdale on a hiking trip through Utah in 1988. “It was a gamble,” he says. “I didn’t know anything about the community.”

Many felt that Bimstein was the one public figure in town who had been actively improving Springdale’s reputation. As president of the town’s arts council, he’d persuaded the New Music Festival, an annual international event, to come to Springdale in 1992. That year, the festival was spread over a dozen locations, including Berlin, Chicago and Los Angeles.

After some initial hesitation, Bimstein decided to run. “I started to get excited about the idea,” he says. “I thought I could do some good.” He was not your typical politician. Instead of organizing rallies of his supporters, Bimstein campaigned among voters he didn’t know. He would call up a family and ask if he could drop by to discuss whatever was on their minds. “I could meet people and, in case I actually got elected, I could get a sense of what their concerns were,” he says.

Even more unconventional than his campaign style was his platform, which Bimstein summed up in one work: civility. “I told them I didn’t see the mayor’s job as pushing through an agenda but rather as moderating and facilitating,” he explains. “We all have to listen to each other and respect what the other person thinks.”

The voters liked what they heard: Bimstein swamped two opponents, taking 60% of the vote. Two new like-minded council members were swept into office with him. He immediately began making changes: encouraging citizens to share their concerns with him, appointing new members to the planning board–and reminding everyone to listen. He instructed his new appointees in town offices and committees to treat each citizen equally. “I told my friends before the election, “If you expect any special treatment from me after I’m elected, forget it,” he says. “They actually liked that.”

The new mayor’s civility platform had an immediate effect. “The atmosphere has change,” says Don Falvey. “Now it’s conducive to mutual cooperation and problem-solving.” One citizen has even given up attending council meetings: “All they do now is conduct business. They’re no fun anymore.”

In addition to being a respected leader, the mayor is also an accomplished musician. In the early ’80s, he fronted the successful New Wave band Phil ‘n’ the Blanks, marrying the band’s co-lead singer, Blanche Blacke. (The couple divorced amicably in 1990, and then Blacke returned to big city life.) Though he’s not a Mormon, Bimstein has sung with the choir of the town’s Mormon church and composed a commemorative piece for Springdale’s 30th anniversary.

Bimstein’s friendship with Garland Hirschi, a 71-year-old cattle rancher, inspired him to combine Hirschi’s voice, the lowing of the cows and instrumentation into a strangely moving composition titled “Garland Hirschi’s Cows.” In another piece, “Dark Winds Rising,” he combined the voices of Native Americans from the area with the sounds of a string quartet.

Bimstein was among this year’s recipients of a grant from the national Meet the Composer New Residencies program, which selects five composers annually. Each receives $235,000, which is shared with his community to help make music an integral part of its culture and to gain wider exposure for the composer’s work. “In my music, I like to look at my community and see what is unique,” Bimstein says proudly. “I want to tell the stories of the people.”

“I started to realize that being mayor and being a composer can both be creative,” he adds. “Being mayor is like making a collaborative composition.”

Collaboration has become a watchword in Springdale. Park workers volunteered to paint the town’s gazebo. The town and the park worked together to develop a new shuttle transportation system. And when a sudden late-night rockslide dammed up the park’s Virgin River and threatened to flood campgrounds and low-lying buildings, Park Superintendent Falvey turned to the mayor to help organize emergency evacuation relocation inside and outside the park.

Last year, this unprecedented level of civility earned the town and the park an award from the National Park Foundation in Washington, D.C. “I feel at home in this community,” Bimstein says. “It’s a good place to be. We had lost faith in ourselves, and now it’s being restored.”