My wife listens to murder mystery novels while she quilts. (The most recent was a Dean Koontz novel. Gaaack !) It gets the quilt done, but at what price to sanity, I cannot say. 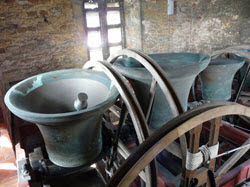 So I was relieved to discover that the murder mystery The Nine Tailors by Dorthy L. Sayers was published in 1934. That makes it, at least, historical rather than just pulp fiction. I was further encouraged by reading the recommendation of Sinclair Lewis (Elmer Gantry) and Christopher Morley (Kitty Foyle) on the back cover. The foreword let me know that bell change-ringing was a central part of what the book was about, so I read about that for a while and learned the definition of ‘campanology’. The Ring Out Your Dead episode of the popular Midsomer Murders was all about bell change-ringing too. Who knew that bell change-ringing could be such a deadly hobby?

I read in front of my computer with its all-knowing search engine. I learned the etymology of ‘morris dancing’ for example. (Lost in antiquity, but cognates are spread all over Europe.) Blending of old (this 1934 book) with new (Internet search engines) is a bonus we get from living today. One of the first names in the first chapter was ‘Tebbutt’. I wonder if there is a linguistic relationship with my own, ‘Mabbutt’. Few people even recognize my name as English. And I read that fixing a bent axle on a car is a job for a blacksmith in 1934. Connecting with the past is a great reason to read older books.

The book is also a great example of the cultural difference between then and now. For example, when the murdered body is discovered, the entire rural community becomes involved and everyone contributes their time and property without even thinking about it. The body is moved to a neighbor’s outbuilding with perfect confidence that the neighbor will agree. They know immediately that the victim was a stranger and when he was last seen because everyone knows everyone else and what everyone else is doing and has done. In a suburb today, unknown authorities would take care of everything. Even close neighbors might only know what they see on the news. The necessary handling of the body would be done by paid specialists from somewhere else. Springdale isn’t that far along in the anonymity of neighbors, but we’re getting there.

When you start reading, you are thrust into a total immersion course in gobs of characterization, rhapsodizing about scenery in the English fen country, and cultural aggrandizement. Too much of that in one sitting would be an overdose. So to begin, I read it in small sips rather than one continuous chug-a-lug. That turned out to be a great way to get into the spirit of the book, layered as it is with effusive language and the local color of rural England in the 1930’s. The first third of the story seems to be just a bare framework necessary to support the aureate effluence of prose. The murder doesn’t actually take place until over eighty pages have been turned and the deed itself is spread out over another ten.

Around page 130, the style changes abruptly from overloaded prose to continual dialog as Sayers gets into the actual murder mystery. Dialog is the only way to convey unfolding events to the reader. By this time, it comes as a welcome change. I noticed how Sayers uses the young girl Hillary as a device to avoid having to describe what the detective Wimsey is thinking and doing. Hillary makes statements and guesses and all Wimsey has to do is confirm them. (Hillary is also used as a way to clothe our hero in virtue at the end of the book. After all, he is a titled member of the nobility.)

The social climate of England in the 1930’s is exposed between the lines too. A major plot line turns on the fact that one of the characters is willing to sacrifice his life to avoid the unbearable disgrace of living and having children with a woman to whom he is not legally married, even though it’s accidental. (Over forty percent of children are born to unmarried persons in the US today.) The lives of whole families, condemned to crushing poverty by events in the book, is hardly mentioned since it’s not important. The status of peers of the realm is featured prominently and the inferiority of the French is taken as granted. The way the author assumes certain social truths in worth keeping in mind in this age of Muslim hijabs (head scarfs) and the use of recreational marijuana. (More than 41,000 Americans are in state or federal prison on marijuana charges right now, not including those in county jails.) See my article, I Don’t Know! for more on this theme.

I congratulate Sayers for writing a detailed and air-tight mystery. You can have fun with today’s throw-away mysteries by poking huge holes in the stories, but not this one. There’s a lot of detail and I couldn’t find any part of it that didn’t fit. Sometimes, today’s mysteries use unknown details that the author pulls out at the end to tie up messy loose ends, but this one unfolds gradually and graciously, like a well-planned banquet. By the time I reached the final third of the book, the answer to the final mystery was obvious but I still couldn’t put it down and read until well after midnight to confirm my guess and simply because the book was such an enjoyable reading experience.