In a recent Springdale Town Council meeting, a ZiCC person registered a strong complaint about noise. In his case, the noise was coming from one of the band performances that are becoming popular in Springdale. At least four restaurants in Springdale have started sponsoring live music performances to draw in more business – and more are planned. (See my article in the St. George News.) In this case, the music could be heard inside a nearby house with the windows closed. 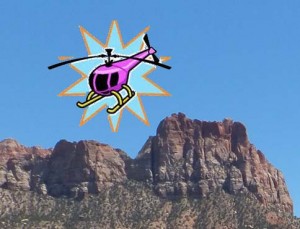 There’s no doubt that Springdale needs to develop a clear and comprehensive policy on this that is better than the relatively confused situation that exists now. The current ordinance on this (4-3B-2 in the Springdale code) states that ANY loudspeaker is prohibited.

“The noises which are specifically prohibited include: Using or operating a loudspeaker or sound amplifying equipment … for … transmitting music.”

That’s completely unrealistic. Every one of the businesses in Springdale that sponsor music now is in violation. Even the Farmers Market on Saturday uses amplifiers. But for most groups, you can’t even hear the music on the sidewalk in front. Laws that are normally ignored are termed “nullified”. In effect, this means Springdale has no ordinance on this subject.

The Springdale Town Council did a merry jig around the issue for a half hour or so and never did reach any kind of conclusion. Councilor Louise Excel expressed my point of view on this best. She and I live up Surprise Wash from the Zion Park Café. They’ve had a few groups perform in the past. Louise said she and David got out on their patio and danced. Good on ya, Louise! Taste the Strawberry!!

It gets back to the fundamental question, “What kind of town do the people in Springdale really want?” Rockville has answered that question. They are facing a crisis because there is no way they will be able to raise enough money within the town to repair the treasured old Rockville Bridge that is now falling apart. They’ll probably have to take whatever UDOT demands (probably a new concrete bridge, whether they want one or not). In Springdale, we would find it much, much easier to finance something like that because it would be a relatively modest percentage of our budget. On the other hand, Rockville has quiet – dark skies – a peaceful rural atmosphere … all those things that we SAY we want.

Of course, there is the subjective “but” in Springdale’s ordinance.

“… in such a manner as to cause a noise disturbance …”

So what is a noise disturbance? Different people will give you different answers and that’s the heart of the issue. The same ordinance could be interpreted to prohibit my dog Sirius since lots of people have told me that they can always tell when I’m driving through town because he barks in the back of the truck the whole way.

“… harboring any animal (or animals), which, by frequent or habitual noisemaking (e.g., barking), causes a noise disturbance …”

Roxy and I think that the worst noise pollution by far is the BRRRAAAAAP of a motorcycle and there are plenty of them that go up and down SR9 every day. We live quite a distance up Surprise Wash and motorcycles disturb us the most. We think there ought to be an open season on motorcyclists to keep their numbers under control.

One new source of noise that is becoming more and more common is the wap-wap-wap of a helicopter. We could live with official life flights, but there’s a company in Hurricane now that is sending their rickety little nuisance up the canyon more and more with tourists who have more money than respect for others. The common opinion is that there is absolutely nothing that we can do about it.

Even Rockville has to put up with motorcyclists and helicopters. If you want to protest about noise pollution, write your congressman about regulating helicopters, especially over national parks and write your state representatives about better regulation of mufflers on motorcycles.

But maybe I’m all wrong. What do you think?

One thought on “Noise Pollution”