Stories mushed through a sieve from one language to another seldom have the enticement of either. The translation by the thoroughly English Stuart Gilbert didn’t help. Gilbert renders men in the story as “chaps” and storms as “cyclones”. I wondered what the original French was for “napery”. I hardly knew what “napery” was in English, even less a “menhir”. The story takes place in Argentina but all of the characters have French names. I thought Argentina was Spanish. 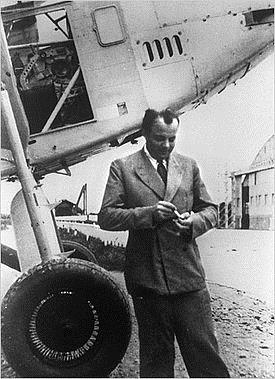 Because we are adrift in a foreign time and place with language that has been run through the literary equivalent of a food processor, the great advantage of the style of Saint-Exupéry is wasted on us. He invests a full page on the act of a pilot departing from his airplane.

“… he turned toward the officials and his comrades, gravely taking stock of them as though of his possessions. He seemed to pass them in review, to weigh them, to take their measure, saying to himself that he had earned his right to them, as to this hanger with its gala lights and solid concrete and, in the offing, the city, full of movement, warmth and women …”

The French are famous for their extravagant, sugary, curlicue-laden, brightly colored and fanciful deserts, which are also often lacking in nutritional value.

Even Saint-Exupéry’s confectionary runs short of poetic metaphors. Townsfolk promenade around village bandstands twice. (page 25 and page 36) A pilot’s view into the dark night is as insubstantial as a miner’s safety lamp in two places. (page 35 and page 51)

It is a book about another time and place, as foreign to desert dwellers of the 21st century as knights in armor or arctic explorers driving dog sleds. In fact, it is foreign to everyone in this time. Saint-Exupéry describes pilot and airplane as one undivided entity, with the airplane being “metal turned to living flesh”. Today’s pilots are office workers in the sky who hardly know their machines. Indeed, some pilots today do their work from half a world away in darkened rooms. Saint-Exupéry furiously churns words to make us feel like we are in flight with the first airplanes across the barren Argentine pampas. But it is no use. We cannot feel it because we have no references in our time to build on.

In fact, the book isn’t about night flight or airplanes at all. It’s about men and work. The book is a hymn of praise for work. The men sacrifice their lives to their work – some quickly and others over many years. The main character Riviére has sacrificed his humanity at the altar of his work. He has become a hardened little man with a rotted walnut for a heart. When his subordinate dares to mention that an illness is robbing him of rest, the response is, “Stops you sleeping, eh? So much the better for your work.” The young wife smooths the sheet beside her sleeping husband, not for his sake, but rather to better prepare him to be “summoned to the front” for more work. I knew such men as Riviére. Some are dead now. I’m glad that they are.

In Night Flight’s value system, work is not done for pay, or to serve masters, or even to satisfy the demands of customers. Riviére scoffs at such trivial concerns, “The public does as it’s told!” It is worth noting that the fate of the Europe mail on another perilous flight is carefully included in the narrative. But we do not learn the fate of the two men trying to bring the mail up from Patagonia. It is the work that that is precious, not the men.

In Night Flight’s value system, work is not just the most important thing, it is every thing. Saint-Exupéry asks, “Under the mandate of … what ruthlessness did that … leader of men compel his hordes.” We all might well ask that question. And we should also ask why we do not answer that ruthlessness with revolution. Does the mail always need to go through? Is it worth your life?