Plan for Yosemite Calls for Scaling Back Human Activity

Yosemite gets about 4 million visitors a year. We get about 3 million. But I think the desert ecology of Zion is more sensitive. Kill a plant in Yosemite and it can grow again if it isn’t continually killed. Kill a plant here and it may be gone permanently. 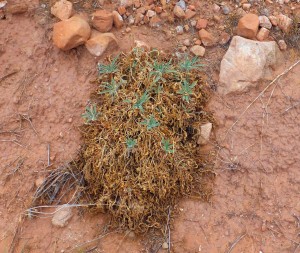 Desert plants show a toughness that fascinates me. There was some rain this spring and the desert primrose around my house exploded in a magnificent display of fuzzy green leaves and white flowers. Then the month long dry spell in June hit and they all died back to brown clumps.

There has been some rain in the last week or so.

The Republican congressman, Representative Tom McClintock, who represents the district that Yosemite is in, described the people who would like a better plan for protecting Yosemite this way, “the most radical and nihilistic fringe of the environmental left.” That’s not a very nice thing to say about me. What if I said nasty things like that about you? (Oh! I forgot! I do!) I suspect that our own representatives might say similar things if a similar plan was proposed for Zion.

How Many People Go Through Zion Park

If you attend Town Council meetings like I do, you hear the number 3 million tossed around as an annual figure. Actually,  the real number is less than that. We’ve been bumping up close to it for the last couple of years. But we will exceed that count soon. It’s inevitable.

So … taking the round number 3 mil as a starting point, that means that  …

(I think I met that half person the other day.)

Do we need a plan like this for Zion? It took a lawsuit to get one for Yosemite. Will it take a lawsuit for Zion? If we did have one, what should be in it?

Maybe we should just sell Zion to Six Flags or Disney and let them figure it out. It would probably put a dent in the debt. And then we could tax them too! (Or … maybe not. In spite of the fact that they made billions in profit, General Electric paid no taxes in 2010. Source.)

Here’s a chance for our candidates for Town Council and Mayor to tell us where they stand on this issue.